Published May 15, 2013 by EarthSpirit Community on EarthSpirit Voices
Written by Alison Mee

Alison Mee,  has been part of the EarthSpirit community since 1999. She lives near Harpers Ferry in West Virginia. 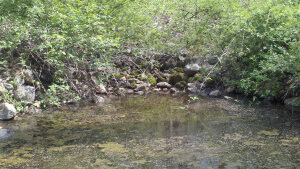 A year ago, as events in our lives unfolded, both logic and intuition told my husband and I that we needed to pick up and move our family from our home of 18 years, to somewhere new. We felt about as sure as we could be, that the move was right for us, that we were moving toward greater joy. But that didn’t make it easy for me to leave the land.

I had allowed myself to fall in love with the land on which I lived. I had connected to it as deeply as I knew how. One summer, I decided that every single solitary day, I would eat something from my land. I started with the chives and the fresh onion grass of spring. Then, with my relatively meager gardening skills, I grew some vegetables, and brought snap peas with me when I traveled, keeping them carefully and eating one every day. By autumn’s figs, I was feeling the land as part of myself.

I went through retreats, of staying on that land for a week or so at a time, spending time outdoors, but not going beyond that piece of land. I composted the story of my life, into the soil: apple wood from the home where I grew up, branches from the woods behind my grandmother’s house, flowers from funerals and weddings. The first time we placed each of my children’s feet on the earth, it was there. I brought bits of the land — soil, moss, pine needles — with me when away from home.

How could I leave? I could leave, I found, with love, appreciation, and intention.

As soon as we knew we were going to be selling the property, we had a family ritual with the land. We thanked it for it’s support of our family, and rejoiced in all the great years we’ve had there. Then, I opened up the thicket, the space that I had set aside some years ago to be mostly free from human intervention. I wouldn’t be protecting it in the same way anymore. Our relationship would be changing.

Then I sought to use my connection to the spirit of the land where I had been living, including the local river, to reach out to the land I was moving to, to help me find my correct path. Somewhere, I knew, was a place that could give me what I was needing, and likewise, could need me. I wanted to let the land reach out to me, as I searched for it.

When we were looking for our new home, I paid as much attention to the land as I did to the houses. We explored all over the county, and I smelled the dirt. At first I was shy and kept trying to do it when the realtor wasn’t looking, but eventually I got used to his attentiveness and he got used to the fact that I spent more time on the land than in the house. I stopped worrying about his opinion of me. Finding the right land was more important to me than not weirding out the realtor.

If I weren’t going by smell, I’ve since learned that I could have gone by field guide maps. It turns out that what smelled so good to me was biodiversity. Where we live now has a huge variety of plants and animals.

Now that I’m here, I’m falling in love again. Instead of plowing in with what I think should be here, I’m waiting and letting the woods show me their paths. I’m watching to see what’s going on. Who has been living here before me? What needs to be done? What’s been waiting for me? What would rather be left alone?

I bring water from my old home, to my new home. And earth. And sap from the white pine which used to be my meditation spot. If I were moving very far, I might worry about bringing non-indigenous plants, insects or microorganisms. But it would still be acceptable, generally, to bring vegetables grown in one home, and then compost them into the land in the new home. And in this way I’m bringing the story of my life forward, weaving together the connections.

Now it is spring, and I am seeing the emergence of new flowers, hearing new birds, connecting deeper with the spirit of this land.

And tasting the sweetest onion grass in the world. I’m home again.

Katie LaFond Editor's Note: Katie LaFond began the Jolabokaflod tradition for the EarthSpirit Community in the middle of the Covid-19 pandemic — when most of us were isolating and unable to see each other in person — as a way of connecting as community. She wrote this two years ago, but just recently submitted for publication. This is the third year (2022) that Katie has run an EarthSpirit Jolabokaflod....

Katie LaFond Editor’s Note: Katie LaFond began the Jolabokaflod tradition for the EarthSpirit Community in the middle of the Covid-19 pandemic — when most of us were isolating and unable to s…
View on Facebook
·Share

by Andrew B. Watt Like many people, I spent my quarantine time learning baking skills. Instead of focusing on sourdough bread, though, I learned a lot about tarts, cakes, and pastries. In the fall of 2020 I made apple and pear tarts, which involve slicing up the fruit and arraying them in fans within a pie crust. In the spring and early summer of 2021 I worked on lemon curd tarts, and then berry tarts — strawberry, blackberry, blueberry....

by Andrew B. Watt Like many people, I spent my quarantine time learning baking skills. Instead of focusing on sourdough bread, though, I learned a lot about tarts, cakes, and pastries. In the fall …
View on Facebook
·Share

Oh that was beautiful. The end brought literal goosebumps for me. Thank you Andrew Watt ❤️

Spot on! Loved the ending 😊

Oh my goodness. That ending - how beautiful!