Continuing from previous post the future of my people’s musical traditions, developing a captive breeding program for antelope in Kopeyia might be a way to help retain Ewe musical traditions. “Hey, how hard can it be?” 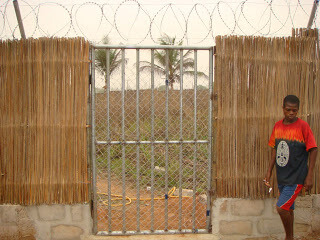 Since then, the three of us have worked to bring this program to life. After Emmanuel returned to Ghana, he identified some land adjacent to the Center on which the facility could be built and engaged the participation of a friend, a man named Christian, with construction experience to act as general contractor for the facility. Christian lives in the city of Ho, which lies about two hours north of Kopeyia and is in the region where hunters can still find antelope, so he also began the task of developing contacts within the community of hunters there, which we would rely on in the months to come.

Joss and I, for our parts, began to raise the funds necessary to begin the construction as well as to do the necessary research on the antelope themselves, particularly on their breeding behavior and husbandry needs. Joss produced a video about the project, which we used to raise the first round of funding through Kickstarter, a web-based service that allows people with ideas for creative projects to reach out to others who are interested in supporting worthy causes. Many of you reading this now are among the almost 100 people who contributed to the project, called “To Make the Drums Sing.” We raised almost $4,000, which went entirely to support the initial phases of construction. (You can still see the video on the Kickstarter site, although it is now closed to contributions.)

I spent my time trying to learn everything I could about antelope and captive breeding. I found myself at a bit of a disadvantage in this because my professional experience has been largely focused on wildlife in North America, and I don’t have any previous field experience with the species involved. I was confident that domestication and captive breeding of antelope would be possible; not only had others done this successfully with some species, but antelope are in the same group of mammals (the family Bovidae) that include goats, sheep, and cattle, which are perhaps the most successful forms of domestic livestock in the world.

But even though it was possible, it was also possible to do it wrong. I knew that we wouldn’t have the money for long-term experimentation; we needed to start the project with as much information as we possibly could.

Language proved to be a major barrier. Emmanuel and Christian could only express their knowledge of what species we wanted to raise in Ewe. My ability to review the published literature and seek advice from zoo professionals required that I know the species names in English or their Latin genus-species binomials. It took several months of emails and phone calls throughout North America and Africa to find a wildlife biologist with enough fluency in both English and Ewe to help us make the translations. (It later turned out that, even then, the translations were not entirely accurate, but at least I had somewhere to begin.)

In early December, Joss and I finally left for Kopeyia to start the construction of the facility and the collection of the antelope. Bearing the fruits of our fundraising and research efforts, we arrived near the start of the dry season, a short window of time during which construction would not be hampered by rains and the antelope would be (relatively) easy to catch. There was no time to waste.

During the month that we were there and the following month after we had to return to the U.S., the project moved forward out of its purely conceptual phase. Several threads to the project were launched almost simultaneously, each of which was an integral part of the whole. The facility is now finished, complete with shelters and landscaping. And on February 16th, the first antelope, a baby bushbuck, was introduced into it. Emmanuel named her Dzidefo, which in Ewe means “confidence.” Since then, a few other antelope have joined her, all feeding on cast-off plant material from farm fields, such as cassava leaves and coconut husks, which are known to be favored foods.

The spark that was originally ignited is now a small flame.

Much remains to be done, of course. More antelope need to be added to the program. It has proven harder to capture a critical number of the Maxwell’s duiker, the species that we think will be the easiest to raise and breed. Time still remains in the dry season to meet our target for the year, so efforts at capture continue. We also need to secure on-going funding to hire permanent staff for care and security. In addition, the regional paramount chief, Torgbui Fitsi, has asked us to consider ways to develop an educational program that will link the facility with the public schools in the region.

All of this will require financial support, of course, so to increase our ability to raise funds through both public and private sources, we are now in the process of incorporating “The Ghana Antelope Project” as a non-profit organization with the ultimate goal of securing 501(c)3 tax-exempt status with the IRS.

Once that happens, we’ll see just how far this fire can spread.

Hey, how hard can it be?

Western MA folks, come see us at Western Mass Pagan Pride Day in Northampton today! Sarah Rosehill is talking about animism at 11, Jac Clark is talking heathenry at 1 pm, Will and Lynn Rowan are performing at 2 pm and EarthSpirit merchant Joy Star’s Story is here all day. Ritual at 4:30 pm! ... See MoreSee Less

Where are the events taking place?

EarthSpirit is proud to announce the launch of EarthSpirit Visions - a place for EarthSpirit Community members to offer photographic images that open conversations with the places where Earth and Spirit meet.

EarthSpirit Visions began its Instagram presence, @EarthSpiritVisions, in May of 2021 where EarthSpirit Visions core team members have been posting nature images each day. Now, 3 months later, with this formal public launch the team welcomes EarthSpirit Community members to share nature photography, inspired by a different Focus during each lunar cycle, with one another and the larger community. Submissions are welcome by September 23, for the October theme of “Fungi, Forest Floor, Cooperative Organisms”.

We have so much gratitude for the EarthSpirit members on the Visions Core Team who are volunteering to manage this project.

To find out more about EarthSpirit Visions and about how to submit your photographs. Visit: earthspiritvoices.wordpress.com/earthspirit-visions/

And to browse the beautiful collection of photos already posted visit: www.instagram.com/earthspiritvisions/

The EarthSpirit Saturday event planned for this week (July 17) is cancelled. We’re sorry to miss seeing your faces and will be back on August 7 to celebrate Lunasdal! ... See MoreSee Less